The annual Owu Day Festival tagged ‘Odun Omo Olowu’ is no mean feat. Its implementation takes several months of gruelsome planning and mind-boggling expences for it to record a success. It is a week-long affair which this year will span from Monday 1st of October through Sunday the 7th. The highlight of the whole week as usual shall be at the Ita-Iyalode venue where variety shows and the Yam-cuttting festival shall be staged in the presence of the Who is Whos of Owu, Nigeria and the International Diplomatic services on Saturday 6th of October, starting by 10am.

The burden of ensuring a successful outing shall once again fall on the shoulders of Prince Adekunle Adeshina. Last year, he took over the planning of the annual festival from the ever-vibrant work-a-holic General Ekundayo Opaleye, the Balogun Erunmu who had successfully staged the event for many years and was literally screaming for relief in the form of a successor. Well, he got it – in the form of Prince A.A. Adeshina.

But…who is this Prince Adeshina?

Owulakoda.com went to town to unravel this myth! Below are excerpts of the respondent’s utterances during a fact-finding conversation between the Owu Peoples’ website, Owulakoda.com and Prince A.A. Adeshina in his tastily adorned Okelewo office on Lalubu Street, Abeokuta:

(Note: The statements reproduced below are not necessarily rendered verbatim, but represent the approximate intended thoughts and objectives of the respondent, as best as we can determine).

“Yes I am aware that there was a lot of confusion in staging last year’s event. We had lofty objectives, we spent a lot of time at the planning stage, but i guess we measured below expectation in controlling and coordinating. Our team was new at the job, and we were all green and did not fully understand the intricacies involved, but at any rate we learnt our lessons the hard way and we are doing everything possible to block all loop-holes and dramatically improve on last year’s performance.”

“Oh! Mistakes in the programme brochure. I am personally spending more time with the printers this year and ensuring correct pagination, proof reading, and content layout. Suggestions are welcomed. You will see the improvements.”

“We are also going to make a more effective use of space and likely include some historical accounts similar to what was incorporated in the 2002 Owu calendar. The Olowu is currently on vacation, and I expect he will furnish us with some vital historical materials when he returns next week”.

“So far we have released posters, fliers and letters of the occassion, and all other areas of preparation are in top gear. The final stages of preparation will ensue when Kabiyesi returns from his annual leave soon.”

“This year we have even gone extra miles in mobilizing the people. We have visited all the Obas and Baales of the kingdom in their respective domains, inviting their opinions and suggestions, letting them know our intensions and how they can fit in and mobilize their populace for a combined effort in staging expectedly the most successful festival we’ve ever had so far.”

“We also held meetings with all the Alakosos in Abeokuta at the palace where we similarly let them into the broad picture of our plans, spelling out their expected involvements for successful management”.

“While we were on tour of the rural areas to meet the Chieftains, I hired the services of a proffessional photographer with his digital cameras to take photographs of the Obas and Baales in group with their chiefs. I did the same with the Alakosos at the palace. In fact the photographer is on a retainership to do photographic sessions at the palace. The object of this exercise is to build up a database of well-taken photographs which we can use at any time to improve the quality of our presentations at anytime we have a special event to stage in the kingdom. Any of our chiefs can just walk-in to the palace to have his picture updated, digitally.”

“We’ve had a few drawbacks in manpower, some vital members of the planning committee haven assumed new professional appointments which has compromised their available time, but nevertheless, we have not allowed that to get in our way as we have redoubled our efforts to compensate”. 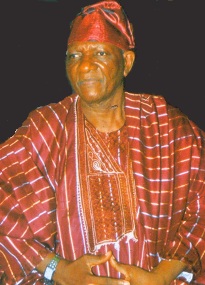 His name in full is Adekunle Akanbi Adeshina. Male, tall, light complexioned with good looks. In fact to the trained eye, there’s an intricate aura of dignified royalty that emanates from him in gentle oozes! He is a sibling of the Otileta Ruling house of Owu, which qualifies him as a bonafide Prince of the Kingdom, in fact…he is the President of the ‘Koruwa’, the Council of Princes and Princesses of Owu Kingdom, which is represented by 5 members from each of the 6 Ruling Houses in the kingdom. In this capacity, he also deputizes for the Olori-Omoba in the Cabinet and Olowu-in-Council. The Olori-Omoba (currently Prince Bola Ajibola) is the overall leader of all the Princes and Princesses. In addition, Prince Adekunle Adeshina was installed with the princely chieftain title of ‘OMOLEEFON’ of Owu Kingdom in the year 2008 by Oba Adegboyega Dosunmu, a title that had previously been proposed to him 13 years ago by the late Olowu Adisa Odeleye, but which he had artfully side-stepped because he “wasn’t prepared for chieftaincy affairs then”. At that time, Oba Odeleye had scheduled 2 chieftaincy titles per Ruling House. The lot that befell the Otileta house were ‘Omoleefon’ and ‘Omoniinu’ titles.

He grew up in the commercial buzzling Lagos where he attended the St. Paul Breadfruit school on the Lagos Island, from where he proceeded to the Eko Boys High School for his secondary education. He then crossed the seas to England for tertiary education at the Polytechnic of North London on Holloway Rd, after which he proceeded to the University of Surrey in Guildford. He is a Mathematics graduate.

His first employment was in London with the International Business Machines (IBM) with duties in Computer Programming.

He returned to Nigeria to join IBM (Nigeria) at Western House, Broad St Lagos, before they later moved to Lapal House on Igbosere Rd, Lagos. On quitting IBM, he went straight into his own private business. During the 3rd Republic experiment of General Babangida (IBB), he started making waves in politics as the Federal House of Representatives member for Abeokuta North between 1991 and 1993 “before we were all thrown out when Abacha seized control” (he retorted).

He was the founding PRO of the Alliance for Democracy (AD), which later synthesized to AC, in Ogun State, an office he held from 1998 to 2000.

In 1999, Prince Adeshina was appointed as the Chairman of Ogun State Teaching Service Commission. He was so favoured in the position that he was highly prevailed upon to take up the job again by Principals and Headmasters in the present dispensation, but tactfully declined “due to advancing age and the rigours of that office” (he added).

He is the current Chairman of OPIC (Ogun State Planning & Investments Corporation), an appointment he took up in March 2012. His responsibilities over the board of the corporation include Town Planning, Survey, Estate Management, building affordable houses to complement efforts of the ministry of housing, and managing the Agbara Estate Free-Trade Zone among others.

I am an Owu citizen of the Yoruba tribe in Abeokuta Nigeria. A traditional chieftain, I am the Asiwaju-Apomu of Owu Kingdom.
My mission is specifically to project the traits and historical antecedents of these intriguing and extremely proud people who are the first...
(click HERE for more of my mission statement)